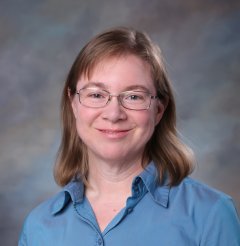 Bio: Michelle Strout is the Chapel team manager at HPE as of January 2021 and a professor in the Department of Computer Science at the University of Arizona since 2015. She earned her Ph.D. at the University of San Diego in 2003, did an Enrico Fermi postdoc at Argonne National Laborator, and was an assistant and associate professor at Colorado State University from 2005 through 2015. Dr. Strout’s main research area is programming languages and compilers for high performance computing and her research interests include sparse matrix computations and the polyhedral model. Michelle received an NSF CAREER Award for her research in parallelization techniques for irregular applications, such as molecular dynamics simulations. She received a DOE Early Career award to fund her research in separating the specification of scientific computing applications from the specification of implementation details such as how to parallelize such computations. Some of Prof. Strout’s research contributions include the Universal Occupancy Vector (UOV) for determining storage mappings for any legal schedule in a stencil computation, the Sparse Polyhedral Framework (SPF) for specifying inspector-executor loop transformations, dataflow analysis for MPI programs, parameterized and full versus partial tiling within the polyhedral model, and loop chaining for scheduling across loops.