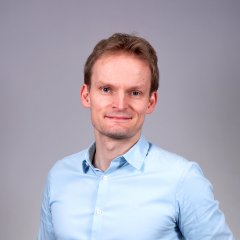 From 2002 to 2006, Robert Wille studied Computer Science (Diploma) at the University of Bremen. After successfully completing his doctorate in 2009 (summa cum laude), he worked as postdoc at the University of Bremen and, since 2013, as Senior Researcher in the Cyber-Physical Systems department of the German Research Center for Artificial Intelligence (DFKI). Besides that, he served as lecturer at the University of Applied Science Bremen from 2010 to 2012 and was guest professor at the University of Potsdam in 2012 as well as the Technical University of Dresden in 2013/2014. In 2015, he became Full Professor at the Johannes Kepler University Linz and head of the Institute for Integrated Circuits (at the age of 32 and as one of the youngest full professors in the field). In 2019, he founded the LIT Secure and Correct Systems Lab at JKU and, in 2020, he additionally became Chief Scientific Officer at the Software Competence Center Hagenberg GmbH.

Robert Wille’s expertise covers a broad spectrum of topics with a particular focus on the development of automatic methods for the design, simulation, verification, and test of complex systems in hard- and software. He considers conventional technologies (from formal specifications to the realization) as well as future technologies (including quantum computing, mirofluidic biochips, optical circuits, memristors, reversible circuits, and adiabatic circuits). Besides that, he frequently applies his expertise to complementary fields in cooperation with groups from other areas of Computer Science (e.g. Artificial Intelligence, Software Development, Theoretical Computer Science, Database Systems, Operation Systems, and more) as well as Mechatronics and Electrical Engineering. Furthermore, his work on future technologies frequently exposes him to topics from physics, biology, chemistry, and optics. Also projects with legal sciences are within his portfolio.

Since 2007, Robert Wille published more than 300 journal and conference papers in this area and was repeatedly awarded (e.g., with Best Paper Awards, e.g., at TCAD and ICCAD, an ERC Consolidator Grant, a Google Research Award, and more). Besides that, he served as Associate Editor and Guest Editor for various renowned journals such as the IEEE Transactions on Computer Aided Design of Integrated Circuits and Systems (TCAD), the ACM Journal on Emerging Technologies in Computing Systems (JETC), or Springer’s Lecture Notes in Computer Science (LNCS). Additionally, he was General Chair and PC Chair for several conferences, is Executive Committee Member of the Design, Automation & Test in Europe Conference, served in numerous Program Committees, and organized several tutorials, Dagstuhl seminars, workshops, and special sessions.